IFLRY at the Parliamentary Assembly of the Council of Europe 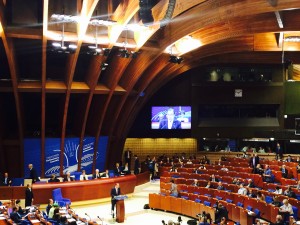 From 22 til 25 June the Parliamentary Assembly of the Council of Europe is held in Strasbourg. Together with Phil Hackemann (JuLi’s), I (Daphnie Ploegstra, JD) am present on behalf of IFLRY to assist at the ALDE delegation meetings and to attend the assembly.

What does the council debate about? Besides having internal elections for a new Secretary-General and new judges for the European Court of Human Rights, a recurring issue is the refugee crisis in the Meditteranean. The urgency to find a common solution in order to protect the human rights of refugees is not only stressed by various parliamentarians, but also by Secretary General of the UN Ban Ki Moon. He was also asked questions on the future of the Millennium Goals, and the expectations of the Climate Change summit taking place in Paris this winter.

Being here, the debates show that Europe faces serious challenges concerning human rights and human dignity, even though we have instutionalized the protection of human rights and the effectuation of the rule of law. These challenges concern the refugee crisis, the human rights situation in Azerbaijan and Hungary but also the dispute on Nagorno-Kharabakh between Armenia and Azerbaijan. Concerning this dispute, following the heated debates in the council, the influence and impact of the Council of Europe sometimes seems insignificant.
This does not mean that the impact of the Council is small. It does mean that the work, efforts and achievements are evolutionary and often not visible for citizens. Therefore, the MP’s in the Council are obliged and should make more efforts to take the achievements with them to their national parliaments and show the importance and progress that has been made so far. 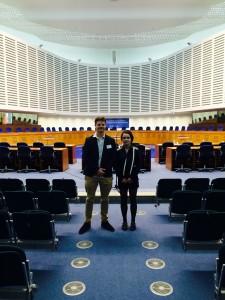