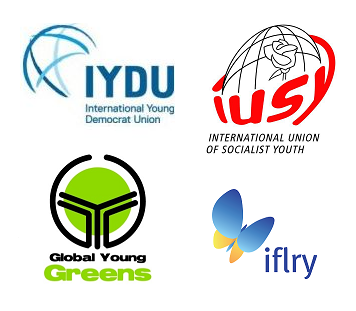 Following recent events, where IYDU has been questioned regarding its independent existence by its own parent parties assembled under the IDU – IUSY, GYG and IFLRY, the young socialists, greens and liberals of the world, unite in the struggle for independent and free voice of youth within all our political families.

Independent and free youth organisations are essential in the struggle for a strong and autonomous voice of young people which in turn encompasses the great essential principle of participation in democracy. The youth have for many decades faced obstacles when trying to raise their voices. Major strides have been achieved over the last decades and progress made both on international as well as local levels to make sure that these voices are not restricted in any manner.

We, IUSY, GYG and IFLRY recognise the sacrifices made by young people across the globe to participate in forums of political decision-making. We recognise the decades of clamour to be accorded equal opportunities and to freely and responsibly participate in the betterment of our societies. In the wake of developments aimed at stifling these strides, we unite, now more than ever, to condemn any marginalisation or condescension of our counterparts in the different political families. Indeed, democracy demands better.

The youth have suffered marginalisation in various facets of life; social, economic, cultural and political. The Independence of Youth Political Organisations as shall be demonstrated below will be under threat if the world endorses the untoward acts of marginalisation and condescension now threatened by IDU upon the IYDU.

The international umbrella organisations for political ideologies should normally not interfere in each other’s work. However, this time we stand together in stating that youth across political spectrums should unite for their independent existence reinforced by a mutually respectful and empowering relationship with their parent parties. Consequently, the Youth must be able to run youth-led and independent organisations to its parent parties. This is the only way youth can meaningfully engage and provide input. Political parties are no exception. In fact, their responsibility is greater as they provide a model for society to reflect upon.

IDU has called an IYDU statutory meeting in London from 18-20 June 2014 without the approval of the IYDU Executive. This is despite the IYDU being an independent national registered non-governmental organisation, with its own statutes and rules of procedure. Statutes are in place to legally guide and lead NGOs worldwide. An organisation, whichever this may be, can never overtake another organisation’s name and scope against this organisation’s statutes. The IDU measures to hold an IYDU meeting without the latter’s approval is illegal and against international, regional and national law.

IUSY, GYG and IFLRY therefore call upon the IDU to desist from taking these illegal measures against its affiliated youth parties assembled in the IYDU.

”We don’t have a unanimous meeting of ideologies,  however, we stand up for each other’s right to exist independently and thus providing a true youth perspective in the frame of our different ideological  families. The youth unite us and for them we must stand together against oppression.”

The IUSY Presidium, the GYG Steering Committee and the IFLRY Bureau