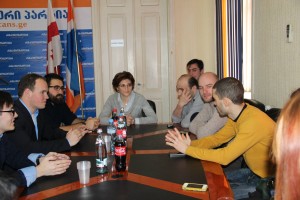 ‘I want the youth wing to be a critical element in our party and IFLRY can help in achieving this’, that is what Republican Party of Georgia chairperson Khatuna Samnidze asserted last weekend to IFLRY. We were present in Georgia to work with the Young Republicans to be exactly that, a source of support but also of innovative and critical ideas.

Meeting with Republican Party chairperson Khatuna Samnidze at HQ of the party in Tbilisi.

Frerik Kampman (IFLRY Secretary-General), Daniel George (IFLRY Treasurer) and an international group of young trainers attended the congress of the Young Republicans last weekend. IFLRY witnessed a very promising new board being elected at the same congress. We congratulate them on their new position and are looking forward to cooperate with them.

To further add an international component to the congress of the Young Republicans, IFLRY organized a training event for twenty members of YR. This training event took place the next day on 23 February and was generously made possible by VVD International. Four young trainers were selected from the networks of IFLRY and VVD and coached by VVD trainer Laurens Heinen, in order to pass on their experience and knowledge on the topic of campaigning to the Young Republicans. This became even more urgent as the date of the upcoming was announced this weekend, which will  be the 15th of June.

Sandro Sarukhanishvili, International Officer at Young Republicans: “This training course, I think, was the one of the most cognitive and inclusive I have attended. I believe that I, together with my fellow party members, got useful insights about techniques and tools of on- and offline campaigning, and how to engage youth in the campaigning process. We will certainly employ this new knowledge in the upcoming elections.”

Participants in the training course were offered four different sessions, each by another trainer. Annelieke Bergink (Jonge Democraten, Netherlands) offered a session on offline campaigning techniques. She worked together with Mustafa Aslan (3H Movement, Turkey) who showed the online part of campaigning. The following discussion showed that the Young Republicans can get a head start by using the most innovative techniques. 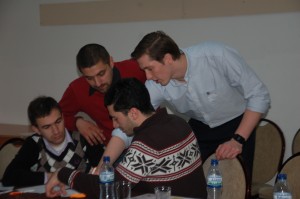 Trainer and participants in discussion

Another track focused on getting the youth party active for campaigning. Farah Irqsusi (Free Thought Forum, Jordan) explained which techniques can be used to recruit and mobilize members effectively. Christian Belling (Venstres Ungdom, Denmark) shared his experience with engaging members by showing that different types of people deserve a different approach. Members of the Young Republicans recruited each other in mock interviews and tried to identify the five types of people among themselves. Participants agreed that all of those types are essential for a healthy and effective team or youth party.

Trainer Farah Irqsusi from Jordan, who was selected by the Cairo office of the Friedrich Naumann Foundation, said that “it was a fruitful experience of meeting passionate diverse youth crossing their way to liberalism. All of which took place in ‘the city that loves you’, which described perfectly the city of Tbilisi. Learning was mutual for the trainers and participants, which actually emphasizes the free spirit of the people present at the training, all self-critical and open for new ideas. I liked this experience a lot and value the opportunity to develop my own training skills further.”

The training was concluded with presentations of the session outcomes and how they connected to the needs of the Young Republicans. Since many newly elected board members were taking part in the training, ideas that were exchanged can immediately be taken up at the highest level. IFLRY reaffirmed its support for the Young Republicans and are looking forward to seeing the newly acquired techniques put to action in the upcoming elections. 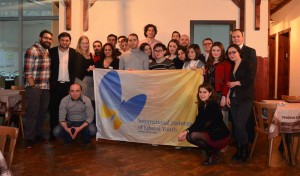 Group picture of the IFLRY Training in Georgia, February 2014