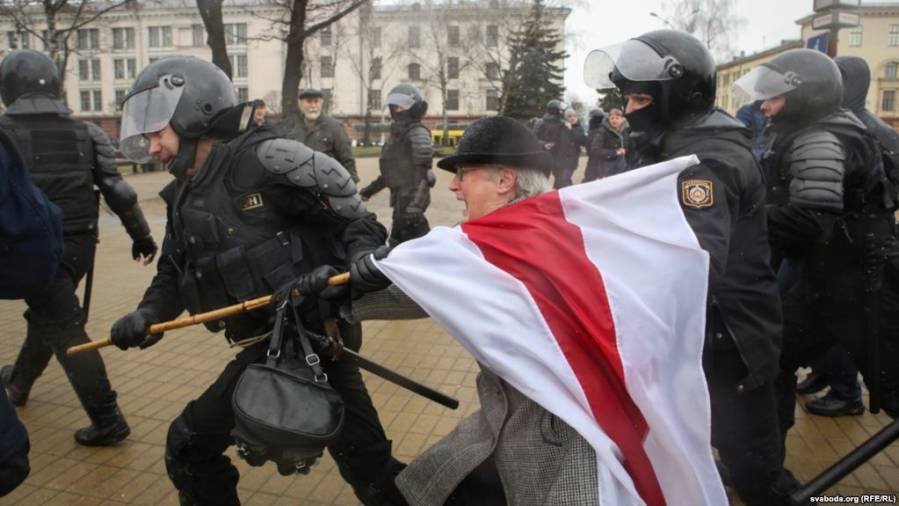 Last weekend, in celebration of Freedom Day – the anniversary of the formation of the first Belarusian National Republic (BNR) in 1918 – thousands of Belarusians took to the streets. The peaceful marches followed the uprisings of the preceding weeks pushed by the deteriorating economy and the authoritarian regime of President Aliaksandr Lukashenka to protest for the abolishment of the infamous Presidential Decree No 3 “against social parasites”. This decree imposes a tax on individuals who are not officially employed full-time. The regime answered with brutal repressions. While many protesters were beaten, riot-police and other security forces also attacked and arrested bypassers or bystanders waiting on bus stops or just being at the wrong place at the wrong time. More than 500 people, including journalists and foreign observers were picked off the street and driven away to police stations and subsequently transferred to prisons and detention centres.  A street action on Sunday, 26 March to support the detainees and demand their immediate release was dispersed in no time leading to over 40 new detentions.

“The violent reaction of the regime to peaceful protests suggests that Lukashenka is either extremely afraid or completely out of his mind or both. It is an absolute disgrace that the government beats and arrests its own people on the occasion of the Belarusian Freedom Day, a day that should stand for the foundations of the Belarusian nation as well as unity and democracy. Especially as the organizers of the protests themselves called for a peaceful course of the manifestations and opposed any provocations, the reaction of the security forces is completely beyond reason”, comments Pauline Kastermans, IFLRY President.

Daniel George, Belarus and Ukraine Programme Manager of IFLRY, makes it clear that the excesses of the last two days can’t stay without consequences: “Lukashenka showed us vividly that all his moves for rapprochement with the European Union and the West are just decoration to prolong his rundown regime. Especially the responsible politicians and institutions in the EU have to ask themselves: Was it helpful to lift sanctions against Belarusian officials in 2016? Should we strengthen this government, its institutions and mass-organizations with financial support? Wouldn’t it be the right time for an extensive shift of donations and programs to support independent NGO’s and the development of a strong civil society?”

Pauline Kastermans underlines that from IFLRYs point of view the relations are once again at the crossroads: “We condemn the crackdown on the Belarusian people last weekend and demand the immediate release and rehabilitation of all Belarusians and foreigners detained and imprisoned during the protests. Furthermore the Belarusian government would be well advised to finally withdraw the Decree No 3 on “social parasites” and prepare grounds for economic and political reforms in the country. Democracies cannot and should not bolster a regime that beats and imprisons its own people for raising legitimate criticism.”