The International Federation of Liberal Youth (IFLRY) Executive Committee was held in Santo Domingo, the Dominican Republic, from 13-15 November 2015 where more than 50 young liberals from all over the world passed policy decisions, participated in training workshops, and presented the annual IFLRY Freedom Award.

“IFLRY has, in the past year, prioritized Latin America and is now seeing a great result of local liberal youth organizations cooperating together regionally as well as feeding into international processes through IFLRY”, IFLRY President Christian Scharling stated.

The Executive Committee accepted the EC hosting organisation CAPP as Observer Members and CEEP from Senegal as Candidate Members to the Federation.

IFLRY debated policies relating to core liberal causes, including a liberal response to combatting tax evasion, legalization of all drugs and the passing of a resolution condemning the government in Venezuela for their violations of human rights and democratic values. As well a roundtable discussion on the challenges faced by Latin American liberal youth organisations was held. 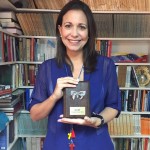 In a further expression of the challenges faced by opposition parliamentarians in Venezuela, IFLRY presented it Freedom Award for 2015 to Vente Joven, the liberal youth organization in Venezuela. Vente Joven was chosen for their work in Venezuela based on liberal values.  “The Executive Committee was a success with important policies adopted, great addresses by keynote speakers, the awarding of the IFLRY Freedom Award, and for the relationship between Latin American liberal youth organizations and the rest of the world“, added Christian Scharling.

Training of Trainers seminar on youth in decision-making processes 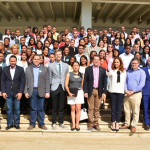 Following the Executive Committee on 15 November 2015, the IFLRY President, Secretary-General and Latin America Programme Manager were invited to address and open the annual CAPP Conference together with Victor Bisonó MP.

From 16-19 November a seminar on youth in decision-making processes, which would educate the participants to be facilitators themselves, took place. Participants included 15 people from all over Latin America together with five Europeans. The seminar was financially supported by FNF, SILC, the Liberal Youth Foundation and the European Commission. The event was addressed by EU Ambassador also Ambassador to Spain in the Dominican Republic, Jaime Lacadena Higuera.

Minutes of the meeting

The offcial minutes of the Executive Committee will be published on the IFLRY website in the coming days.